All Sewing Knitting Crochet Everything Else Yoga Self-Help

Crochet
Frankenstein, light saber and my way on the dark side or correcting mistakes in a knitted sweater
11. April 2018 By Simone Neumann
0

The lights are flickering, thunder rolls and the faint smell of sulphur flows through the air. A young and unearthly beautiful red-haired woman leans over a dissecting table. Sweat pearls down her milk-coloured soft skin and creases of concentration appear between her brows. Her slender hands are holding a vicious looking hook which digs deep into the soft tissue. Folding, knotting, sewing – needles punching pink flesh, scissors cutting excess cord and slowly the gaping holes are closed. And out of the darkness arises the: 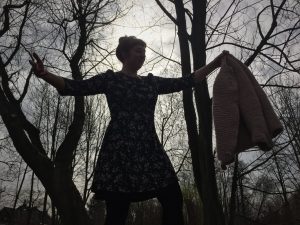 After all of your lovely comments* with so many helpful suggestions and encouragements and @cryptocariad invitations to cross over to the dark side, I did it, I finished the pink sweater. Mostly my mending attempts look more like a failed surgery, but if the light is dark and I do not rise my arms, I can wear the thingy.

I started this cardigan half a year ago, before I started to knit combination style. The result is, that the older parts of the sweater are very loosely knit, and the recent parts are tighter and so also smaller and shorter. I have no idea why I simply ignored this and put the sweater together… resulting in a sweater with one shorter and tighter sleeve.

The next obstacle was, that I used a Japanese pattern which I had in a French translation. Sadly, I neither speak French nor Japanese (no joke, I seem to just shut of my brain sometimes). So, I did not truly understand how the underarms should be sewed together, because there were some life stitches, which the pattern advised not to cast of.

I followed @cryptocariad invitation to the dark side (where is my promised cookie?) and inserted two rows of half double crochet lengthwise into the tighter sleeve. It does not look so bad (please don’t correct me), it could be a design element. The real problem was the sleeve with the ok width, because my sewing… oh dear. I learned from a good friend that knitted items in contrast to crochet items should be always sewed together with the right side visible. I followed this advice. Annoyingly she meant stockinette should always be sewed together with the right side visible, not garter stitch. So, I have made a scar, I have knitted Frankenstein’s monster’s cardigan.

In a rush I followed my path and produced more of this big and bulging seams. Because I did not understand the Japanese instructions, I ~~weirdly~~ simply casted of all underarm stitches and sewed them together, resulting in very visible seams on the right side of the garment.

The last two steps were to crochet some rows of half double crochet as sleeve cuffs to regulate the length difference between the two sleeves and to crochet a buttonband. Again, I was defeated by my laziness: I worked only five buttonholes (I hate sewing on buttons) whereas seven or nine would have been much nicer.

Alas! All is done, and the cardigan mimics a wearable garment. I call it a victory. 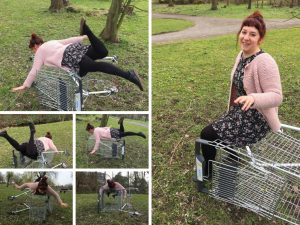 Just that you know, I was totally unclear where I should bring up the light saber… but I really wanted to. Instead of saber photos I just jumped on a shopping cart and climbed a railing – I hope it’s similar exciting for you ?

Thank you all for your encouragement. I would never have guessed that this would help me so much to finish some of my “shame” ufo’s, #needleworkmonday is such a great community. THAAANKKK YOUUUU 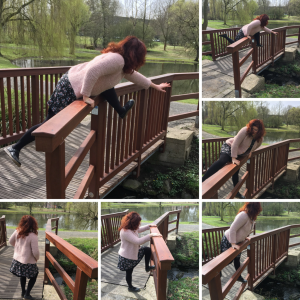 Photos were made by the talented @giavellottista

*You can read all the comments I mentioned in the post above on my steemit blog, where I published this text for the #needleworkmonday initiative.