All Sewing Knitting Crochet Everything Else Yoga Self-Help 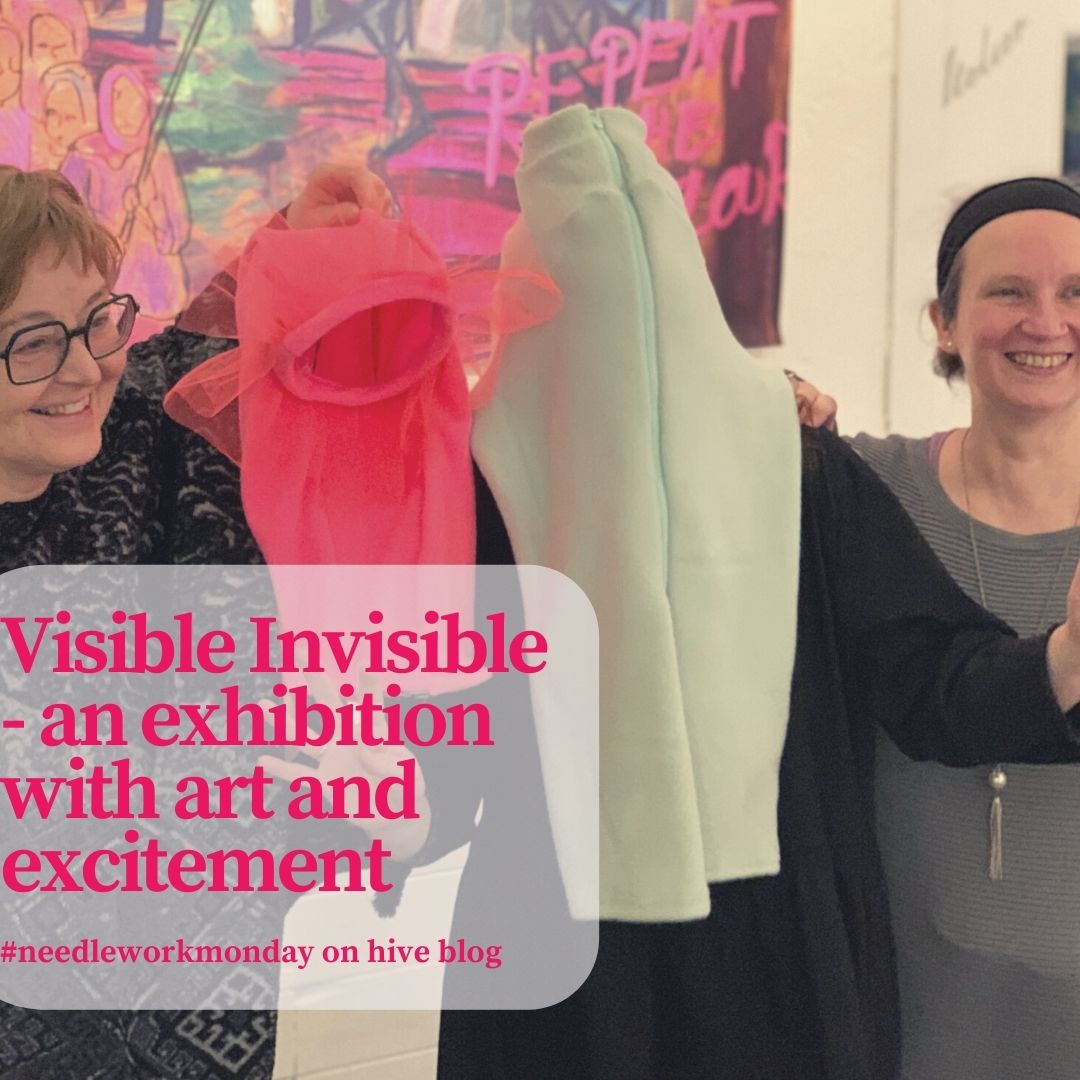 Sewing
Visible Invisible – an exhibition with art and excitement
1. March 2022 By Simone Neumann
0

It’s Friday (ok, while you read this its perhaps not Friday :-DDD) and I am writing a #needleworkmonday post, wow, first time for me to plan ahead. But there is a reason, its because I want to give you the promised virtual tour through our last exhibition, and I fear this will be a long text I cannot write in one go on Monday.
(If you are here for the needlework than hop to the last paragraphs where I talk about my own work which includes sewing)

By the way, when do you write your text? On the same day or in advance of publishing?

Back to art and needlework: follow me along to HANDMADE IV

The last months were occupied by the preparation of a bi-annual exhibition (the HANDMADE) which showcases the recent projects of three artist: Silvia Szlapka, Silvia Müller and Simone Neumann-Salva (that’s me :-D). This year we had a wonderful mix of cubistic plastics, a room installation made from papier-mâché with wood and a room installation with paintings, garments, and more. And because we wanted to houner everybody we made press photos in front of all our artworks :-DDDD

Silvia M. whole art develops around natural materials like paper, wood, or soil. Her artworks are mostly made from recycled goods like old paper bags, garden waste or even older artworks she destroys and mashes into pulp. Her papier-mâché housings are covers for dried vast and branched roots from all over the world. Roots which represent the ties every human has to the land, friends, and family, to memories and to beloved objects. Her housings visualise that our lives are connected to the world around us and that we are perhaps not as easily planted elsewhere as sometimes is believed. The painting in the background and with it the lighter smaller housings present a more recent way of connection. Fragile threads link them together, being a metaphor for social media, and our digital connections. It remains unclear if these connections will perhaps get stronger through the years or will easily fade away as they do not have roots in the material world.

Silvia S.’s artistic exploration often starts with form and material and over the last year her artworks are centred around two dimensional rectangles evolving into the room. Starting with light and spring-like colored oil paintings which dissolve into tiny rectangular forms, leading to reliefs, developing into small character figures which still have the rectangular forms incorporated and lastly evolving into sculptures which are pure angular forms. But her exploration does not stop here as these objects started with fixed cubes and lead her on the way to work with kinetic objects. The newest cube sculpture has moveable parts and allows the observer to interact and to shape the sculpture herself by turning or tilting the individual cubes.

All her artworks are connected by a recognisable color scheme which uses bright hues like yellow and green combined with light beige paint or natural wood.

As I in general work conceptual my installation needs a tad more explanation to make sense. The main topic of my work is still the visibility of women beyond “sexual usability”. It protests the cultural notion that age (especially in women) is less worth than youthfulness. Perhaps you also observed that older women are less visible in all forms of media, may it be in films or books in talk shows and not to speak of the fashion world… If older women are shown they are often reduced to stereotypical roles like the grandmother, the widow etc. They are seldom seen as individuals. For example (sorry now I will be rude) the ugly, hateful, old man can play the role of a lawyer who is the lead in a serial instead of playing the side character “an old man” who brings the plot along (as it would be shown when he was a woman). I know it’s not as black and white as I write this down here, but the tendency to reduce and objectify women is still a topic. And to remedy this I designed a kind of fighting uniform, to give women a dress for demonstrating or for showing ironically their displeasure with society’s norms. Dresses which can be read as super feminine (the girly innocent variation) made of fluffy fabric with gathered wide skirts (I already explained more of this idea here) but are secretly made to fight for women’s visibility as an individual not defined by her looks and age. These dresses have headpieces which on the one side hide the woman beneath it and on the other side refer to the nearly universal cultural idea that women’s hair after a certain age should be hidden (or cut short). I designed these headpieces so that they can be transformed into a sweater or a cowl and so wearing a headpiece is no longer a “must” for the woman but a possibility to change into a stealthy warrior. With these wide dresses and headpieces, one becomes visible invisible. Behind the two dress models I arranged a bundle of hazel sticks… meant not completely serious – as a reminder of witch burnings.

On all paintings figures are shown which are dressed in these “stealth uniforms” and smaller scaled fibre sculptures in form of balaclavas with tulle are arranged in the room to pull everything together.

All paintings broach the issue of women fighting for their worth as an individual, opening the possibility for other people (the observer) to join into their community. All paintings have a dream like surreal setting full of color and strange landscapes. One painting tells the observer to “repent the flour” meaning to shake oneself free of constant self optimisation, freeing one from the shackles of being “that girl” a forever young perfectly healthy and sanitised being who makes Pilates in the morning, walks exactly half an hour outside for optimum vitamin d production, who eats clean, free of sugar, wheat, or any other food adversary. That girl who follows a multiple step skin routine to never get wrinkles or pimples. That girl that fights against life’s messiness and wants to preserve the ever youthful slim and productive body.

Another painting shows the exaggerated portrait of a grinning woman, the mouth overly wide and full of dark scary teeth. Above you can read “Smile, princess” reminding the (female) observer of times when parents or friends berated her to look more friendly, to smile, to please, to hide anger or her “resting bitch face”. But in this painting the woman uses her smile as an attack. No meek compliance but a huge mouth which could devour the world.
In the foreground you again can find the covered figures and further references to woman’s relentless work to optimise. The two unveiled figures are an allusion to a famous depiction of Jesus and Thomas the doubter. Here we find a man pointing/poking his finger into a wounded woman, showing that women still are hurt all over the world and that reducing the worth of older women harms not only the women but steals a huge amount of experience, beauty, and love from society in general. But still there is doubt, still people think “come on, its not so bad” while watching a talk show with all men over 50 and the one invited woman clearly younger and measured to completely different beauty standards. Still doubting.

The next artwork named humorously “the evolution of feminism” consists of a bench you can find in Catholic churches in Europe, a bench which is used to kneel on for praying. But instead of this I arranged painted pads on it. The hue starts with a deep blue turning into a vibrant red at the end. For this installation I referred to older tv ads for female hygiene products, where the presented women were always white, young, slim, healthy, and bleeding clear blue liquid… yeah… I don’t do this :-DDD I cannot remember when these ads changed (because of criticism) and instead of blue liquid a pink liquid was used. Wow, what a success for all women. To criticise that menstruation is up today seen as dirty and impure I built this artwork. As if the change of „blood“ color in pad ads would be the pinnacle of feminism while female products in general are more expensive than products that aim at men and especially hygiene items have higher taxes. I embroidered the title of this artwork on a panty liner alluding to the low value which is given to female work. Above this bench I arranged a series of photos. Photos which all show me while I take photos of myself. But instead of showing myself directly there is another distancing layer inserted as the alleged selfie is a photo of my shadow on a screen and therefore nor real selfie but made by a photographer. This serial self documentation is for me a symbol of how important visibility (in social media) is: I only exist if others see me. Visibility and attention being a currency which not only leads to wealth but also to power and influence. And although social media could be a way to change social standard about what is attention-worthy it also is an important determinant to strengthen dominant values about physical features. It forces people from young age to comply – if they want to be recognised, seen… – or to actively resist, which is very taxing.
Besides the „indirect“ selfies visualise how empty images can be, that there is no contact and reciprocity. We only see the shell of a person. We see a staged reality. We see our own thoughts mirrored.

You see I honoured my promise and wrote a post with roughly a million words :-DDD If you managed to read to the end, know: it was a lot of work for me too 😂😂😂😂

Thank you @crosheille for initiating and @marblely for hosting the #needleworkmonday and the community builder team @lauramica, @romeskie and @kattycrochet I am so glad to be part of.

If you want to see more beautiful projects with yarn, fabric and most of all needles, follow @needleworkmonday on hive blog. Or even better grab your needles and keyboard and join the #needleworkmonday community. You can read more comments on this post on my hive blog.

Read more about my art und upcoming exhibitions on neumannsalva or buy some of my digital artworks on NFT showroom.

Last but not least: if my post coaxed a smile on your face you could support me with coffee on Ko-fi